Scary Artworks That May Just Keep You Up At Night! 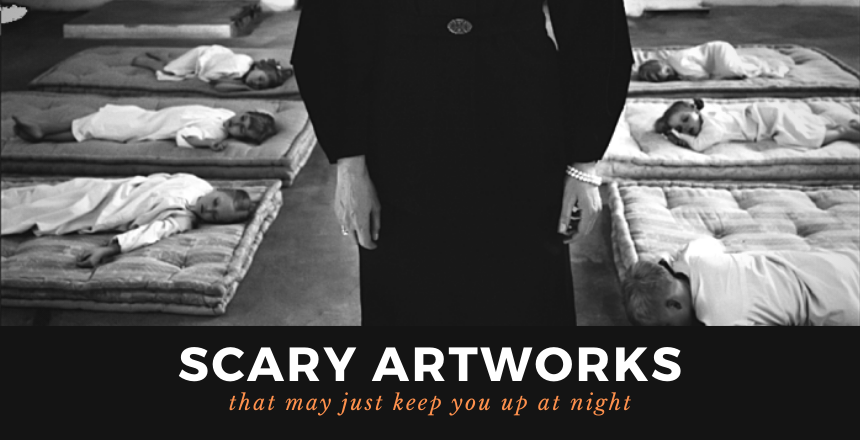 As Halloween gets closer, its gloomy atmosphere gradually insinuates in our everyday lives. To fully let you experience this scary holiday, we could not but select a few artworks with horror themes. See the artists’ darkest and most shivering fears take form in these frightening artworks available on Wallector.com made to terrorize you! Forget horror movies, scroll down and stumble through corpses, suicides, and demons in this blog post that will haunt you in your nightmares. Happy Halloween! 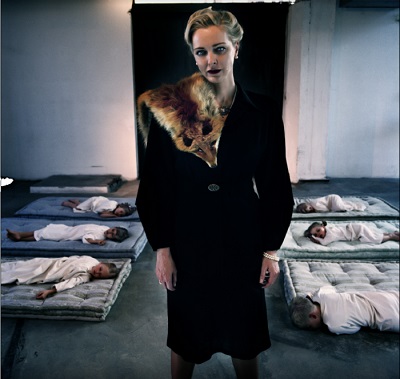 It is April 1945, and the Goebbels family (husband, wife, and six children) takes shelter in the Führerbunker to escape from the Red Army that has just entered Berlin. In the afternoon of the 30th of April, Hitler and his wife Eva Braun commit suicide. In the following day, May 1st, the six children get stunned and killed with cyanide pills broken in their mouths. Afterwards, their parents, Magda and Joseph Goebbels, take their own lives.

The photograph above is a reconstruction of the tragic event as imagined by the photographer, showing Magda Goebbels standing in the center of the composition with her lifeless children lying down behind her. She is staring right at the observer with icy eyes, as if she died together with her children or as a hint for her looming destiny. Her eyes are magnetic and pivotal in the artwork, making the beholder feel curious and horrified at the same time.

- Towards the Peace, Carlo Fornara 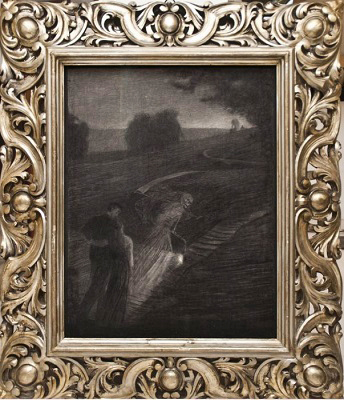 This artwork provides a terrifying yet poetic perspective on death. A narrow upward path through a hilly landscape leads an embracing lovely couple “towards peace”, as the title suggests. The personification of Death precedes the two lovers and turns around to make sure they follow. Death sheds light only on a small part of the path in front of the couple, casting a shadow over the upcoming way and over its own entity. The lovers follow the lighted path unaware of where it is leading to or of what they will encounter along the way: this is very likely a metaphor for time, as we can only see past events but not the future ahead of us. The landscape in the artwork is gloomy and scary, the path is uncertain and mysterious, the figure of Death is horrific and imposing, but what is at the end of the path? Despite its inquietude, the artwork Towards the Peace, veiled in mystery, offers a glimpse of hope for everlasting love after death. 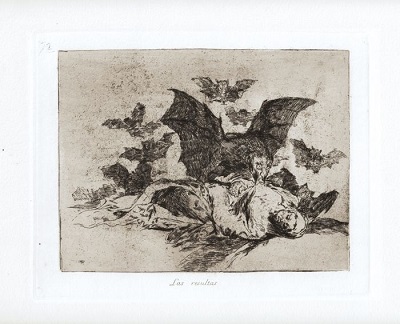 A man, lying down, barely alive, is fainting from the agony that a couple of vampires are perpetrating to him: they are sucking the little blood that is left in him while a whole flock of vampires is getting closer to join the others. The title Las Resultas (The Results) refers to the results of the restoration of the Ancien Régime in Spain. The vampires symbolize the taxes reintroduced by Ferdinand VII and especially by the clergy, "sucking blood" from the people, still burdened by the misery of the post-war period.

The monsters looming above the deadly man resemble those in Goya’s famous artwork The sleep of reason produces monsters. As a matter of fact, the physical appearance of these monsters attests that reason must be lacking, as they, unbridled, emerge from the abysses of the artist’s subconscious. They are the forms of the horrific visions residing in the most hidden corners of his mind, intending to give him nightmares and torment his soul at the first opportunity. 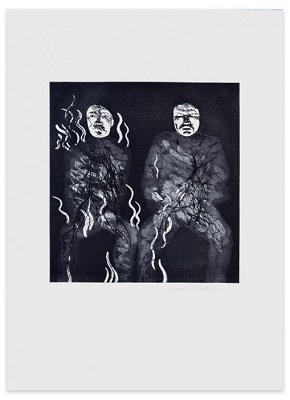 This etching realized by David Hockney refers to one of the six fairy tales written by the Brothers Grimm. Although they are called "fairy tales", they are not really meant for children. They are rather dark and unsettling, dealing with cruelty and ambiguity of life. Hockney chose a few strange and violent elements in the tales and abstracted them from their literary context. The result is a cold representation of a brutal scene with no emotion immersed in a surreal and gloomy atmosphere. In this way, the artist manages to recall purely all the gruesomeness and violence of the original fables.

In this print, two corpses are burning, one with eyes closed and the other staring out at the observer. Their bodies are merely hinted while they melt under the extreme heat of the fire, which lights up their surprisingly clear and defined faces. The etching records an emotionless fact; the observers, instead, are overwhelmed by emotions as they look at such a creepy spectacle of burning corpses with highlighted faces: what happens to the body, mind, and soul after death? what if the bodies are paralyzed but the minds are still awake? These are only a few creepy thoughts that this image can trigger in the beholder’s startled mind.

- Woman with the Devil, Orit Sharbat 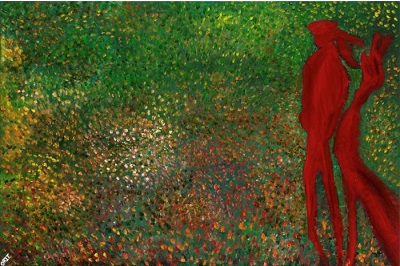 How does a nice walk in a flower field sound? Great, except for the fact that the walk is side by side with the Devil in an otherworldly dimension from which you cannot escape. Indeed, the artwork completely lacks any point of reference with the real world we are used to live in. Everything is strange and unsettling: the two silhouettes on the right have no color but a vivid fire red, while their bodies present elongated and distorted shapes; an undefined flat landscape fills the whole canvas almost submerging the two figures, like if they were making their way through it. A strong sense of frustration rises in the beholder, who is unaware of the figures’ identities, positions, or purposes, and ponders over the possibility of being trapped outside of space and time forever.

This Halloween hang these terrifying artworks on your walls to have the scariest house ever! Visit Wallector.com to find many more frightening artworks for sale! 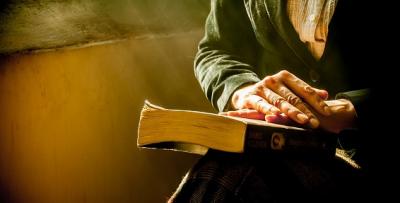 Les Cent Une: A History Of Women, Books and Rights 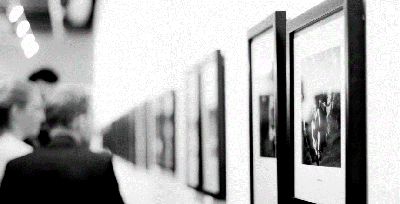 Everything You Need To Know About Frieze New York 2018 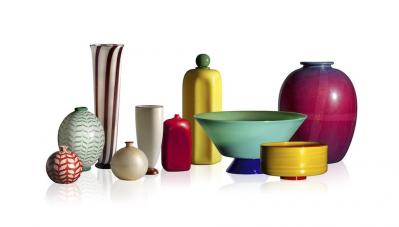 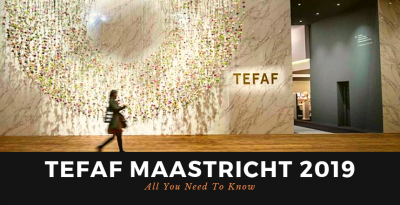 TEFAF MAASTRICHT 2019: All You Need To Know