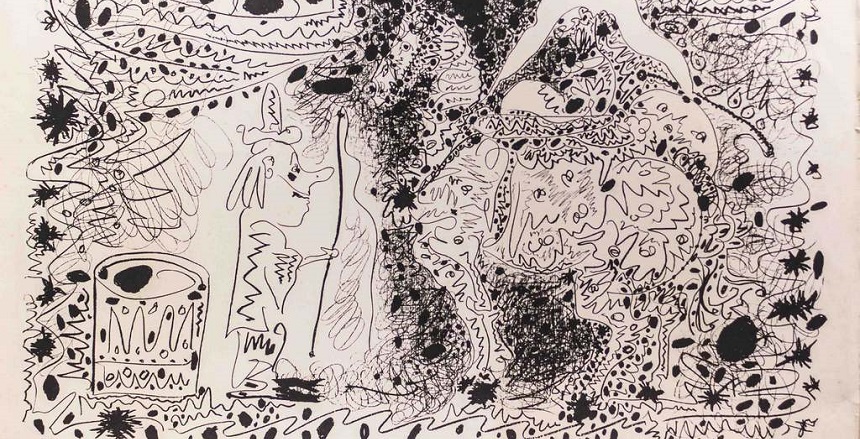 Pablo Picasso is one of the most famous artists of the 20th Century. He was born in Spain in 1881 but spent the greater part of his life in France, where he died in 1973 in Mougins.
He was famous not only for his art but also as a political activist in the Communist Party.
According to various sources, during his lifetime Picasso produced from 50 000 to 120 000 works found after his death.
If one were to choose just one painting representing not only his art but also his political engagement, it would doubtless be the world-famous Guernica. The painting symbolizes above all the horrors of war and expresses his fury when the city of Guernica was bombed in 1937.
The story is told of how he was approached by a Nazi officer who asked him “Why did you do it?”: to which the painter replied, “It was you that did it!”
Besides his extraordinary paintings, Picasso also produced a great quantity of lithographs, some of which are contained in the several books which art publisher Ferdinand Mourlot devoted to the artist.

A public personality, a private seductor

During the First World War Pablo Picasso visited Rome together with Jean Cocteau, and worked as a costume and set designer for choreographer Leonid Massine and for Sergei Diaghilev’s Ballets Russes. In Rome, he met Olga Kokhlova, a ballet dancer who became his first wife and the mother of one of his children. Jean Cocteau, Guillaume Apollinaire and Max Jacob were best men at the wedding.
In his private life, Picasso was a great seductor and he had a great many women in his lifetime. He fathered four children with three different partners, but only married twice. Historians estimate that Picasso must have had around 100 mistresses. Often, when he found a woman attractive, he would – sometimes right in front of his wife – make an erotic figurine for her as kind of proposition.
Pablo Picasso led an intense life and was often at the centre of gossip. A major scandal broke out when he was accused of robbing the Mona Lisa in 1911.
Picasso’s reputation came under fire, especially after Apollinaire testified against him and the painter delivered himself of the famous quote, “Good artists copy, great artists steal.”
But the truth was that the real thief was Vincenzo Peruggia, an Italian employee of the Louvre. After being caught, he served eight months in prison.
Picasso was one of the artists who enjoyed the greatest success during their lifetimes, which made him not only an icon among art lovers, but also a very wealthy man.
He was known for his controversial habit of settling the bill in restaurants by making a quick sketch on the napkin or any other support at hand.
Picasso is famous for his repartee when a restaurant owner pointed out that he had omitted to sign his drawing: “I intended to pay the bill, not to buy the whole restaurant”, the artist shot back.

A master of a variety of media in his work, Picasso, a genius ex-surrealist, is considered the founder of cubism together with Georges Braque.
Picasso was not only a painter but also a sculptor, ceramist, set designer, playwright and writer.
Georges Braque and Picasso reinvented collage in 1912 when Picasso stuck strips of canvas, newsprint and other materials onto the surface of a painting.
Given his talent, as well as Georges Braque’s, collage then became an essential part of modern art, helping people abandon the idea that art is merely a window on nature but is, on the contrary, an arrangement of metaphorical signs.
People often say that opposites attract one another, and the saying perfectly describes the relationship between Braque and Picasso. Although they had very different personalities, they completed each other in creating something altogether new.
During the cubist period, the two artists produced very similar works: they shared not only the same essential style of art but a sincere friendship as well.

A man of his word

As a young man Picasso was always fascinated by bullfights, to which his father used to take him when he was growing up in Malaga. Bulls and bullfights are one of the recurrent motifs in his art, and he got several of his friends, including Georges Braque, Max Jacob, Henri de Montherlant, René Char and Jean Cocteau to become fans too. He was also a man of his word.
La Tauromaquia is probably the best-known and celebrated book illustrated by Pablo Picasso. Its text was taken from a book written by the bullfighter José Delgado, known as Pepe Hillo (or Ilio) in 1796 as a kind of theoretical and practical manual on bullfighting. Picasso started working on it in 1957, turning the book into a masterpiece for Barcelona publisher Gustavo Gili. Its full title was, “La Tauromaquia o arte de torear, obra utilsima para los toreros de profesiòn, para los aficionados y para toda clase de sujetos que guten de toros por Josè Delgado alias Pepe Ilio ”.
La Tauromaquia had a long gestation period, spanning three decades of Picasso’s life. In 1927, Gustavo Gil commissioned the artist to illustrate a new edition of the book for his imprint, Ediciones de la Cometa. Picasso produced various engravings but never enough to provide the publisher with sufficient material for the book. Then, in 1956 Gili’s son, also called Gustavo, reminded Picasso of the promise made to his father, and asked him to finally start working on it.
The next year, in 1957, Picasso kept his promise, delivering a set of aquatints – then printed in 1959 –inspired by the Easter corrida in Arles, which he had gone to. Thus was Picasso’s masterpiece born, with 26 aquatints that transformed Delgado’s book into one of the best and most important artists’ books of all time.

In this work, Picasso probably demonstrated the full extent of the possibilities offered by the engraver’s art when it is used with the greatest simplicity by a genius.
In illustrating Delgado’s treatise, Picasso kept away from the work of some illustrious predecessors, including the great Goya (Tauromaquia, 1815-16). His engravings drew both on his experience as an aficionado and on the great quantity of observations he made during decades of going to bullfights.
Fresh and immediate, Picasso’s engravings use vibrant splashes of ink to depict, in fine and full detail, each of the separate phases of Spain’s great traditional sport.
The technique chosen by Picasso was sugar-lift aquatint, which he used to capture all the emotions expressed in the various scenes. Discover this exclusive piece on sale on wallector.com.