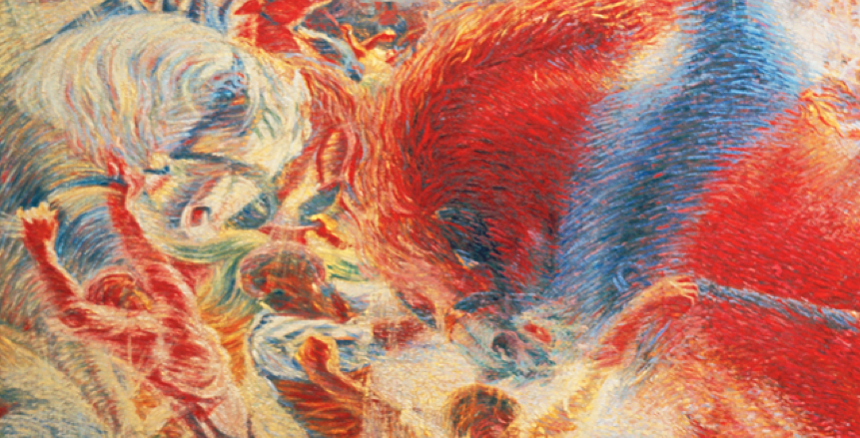 The City Rises (1911) by Umberto Boccioni (Reggio Calabria, 1882 – Verona, 1916) is an emblematic oil painting that contains all the major themes of Italian Futurism. Indeed, it was displayed in different European cities to spread Futuristic ideas among other cultures. The City Rises is currently exhibited at the MoMA, in New York.

The painting shows a construction site on the periphery of Milan

Where men, horses, and machines relentlessly work to build a new modern city. In the foreground, some men try to tame five skittish horses. In the background, trams, scaffolding of industries under construction, and smokestacks increase the sense of movement and speed, which are the two essential elements of the painting.

Movement is conveyed by the manifold lines that chaotically aim at every direction on the canvas. Vertical lines project the city towards the sky and beyond the canvas itself, spiral lines raise up to the sky from the horses’ necks like tornadoes, s-shaped curvilinear lines describe the swirling movement of men and horses. The figures in the crowd intertwine with each other to such an extent that we cannot put them into focus anymore as they get farther and smaller in space. Because of their incessant speed and movement, the working men and horses look weightless. They seem to slide swiftly in front of the viewer, despite their exhausting physical efforts.

An explosion of light illuminates and surrounds all the figures.

Light plays an energetic role of sustaining tired workers with new force and power, and of emphasizing the rise of the new modern city. The whole artwork shows rapid and filamentous brushstrokes, which increase the dynamism and energy invading the scene. This painting technique is called Divisionism, and employs directional brushstrokes that highlight the movement of figures. Through this technique, the masses of color that merge together and collide against each other generate an enthralling dynamic effect.

There is no true sense of space

Because the scene was not depicted from reality, but from the artist’s mental vision. The purpose of the artist is not principally to celebrate the rise of the modern city, with all the hope and renovation it might bring, but rather to emphasize and praise the relentless movement and progress that working men and horses undertake. Boccioni represented the long process of construction, which corresponds to a period of time, instead of depicting the static moment of a finished and constructed city, which corresponds to a point in time. Spatial movement and duration of time destroy the concreteness of figures and cause them to become abstract. In this painting, he explores the interior dynamism of the objects of the modern city, and apprehends “the pure sensation of plastic reality”. This is consistent with the major ideas of Futurism, to which Boccioni was one of the most influential contributors.

Futurism is the most important movement in 20th century Italian art

Indeed, it is the first Italian Avant-garde, as it seeks and announces a cultural upheaval, repudiating the past tradition and experimenting with new ideals. Futurism emerged in 1909, when a gathered group of artists and writers aimed at fostering industrial revolution and urban modernization in Italy. Their leader was the propagandist and impresario poet Filippo Tommaso Marinetti (1876 – 1944). Futurism not only became an artistic movement, but also acquired historical and political significance. Indeed, art and politics supported each other to reach the same goal: the rejection of the past, and the exaltation of the future.

Avant-garde movements often emerge in culturally underdeveloped countries, as Italy was at the time. Italy had just become a unified country in 1861, after a series of civil conflicts that had greatly hindered its technological and industrial development. The pride, fame, and magnificence that made Italy stand out in the past was vanishing. But Marinetti and Futurists felt the need of change, as they acknowledged the state of stagnation in which Italy was mired. They believed that they could restore the national glory of the country, as well as bring Italy to re-emerge as a world power again. And in order to achieve that, they exploited speed, dynamism, violence, and destruction, in which the new concept of beauty dwelled.

The City Rises is a Futurist manifesto, because it encompasses all the major features of this political and artistic revolution.

The concept of modern city was associated with that of an immense machine in movement. The modern city is the place where all the industrial and technological progress takes place, and it is the foundation of the glorious future that the country awaits. Futurists did not admire ancient static cities that dwelled too much on their past. In fact, they called for the destruction of historical locations. They needed an energetic, forward-looking new metropolis to rise, and Milan was the most modern Italian city at that time, because its geographical position, near the border in the central north of Italy, facilitated communication with the rest of Europe. Therefore, it was not isolated and static as other Italian southern cities, but rather enriched with a flow of diverse ideas coming from other cultures and countries.

The City Rises shows that the way to promote progress and build the modern city is work. Boccioni gave innate power and energy to men and horses, praising their heroic actions. The focus is on their agitated bodies, whose muscles are extremely in tension and stretched out as if they were about to tear apart. The untamed horses symbolize the vitality and dynamism of the evolving city. The majestic red horse in the foreground generates a powerful vortex that captures both the workers and the observers. This is a visual metaphor for the relentless progress that drags everything along with it and that cannot be halted.

Dynamism is the device that Boccioni uses to surpass sensorial reality.

His goal is to represent a more spiritual environment that goes beyond the three-dimensional visual perception. He represented the permanent form that objects acquire while getting accustomed to great speed, i.e. the fourth dimension or motion in time, as the artist defined it. He did not make reality more rationalistic; he made it, by increasing dynamism, more emotional.

Futurists were fascinated by representing the modern experience in all its aspects. The City Rises can evoke all kinds of sensations, not only vision. As we look at the painting, we can hear the noise of the bumping materials and the cries of hard-working men; we can feel the heat of the scene, as the sun reflects on the men’s bodies and on the scorching metals; we can even perceive the smell of dust and sweat. Observers around Europe in the early 20th century felt this way, too. Boccioni arranged the painting in a way that could arouse enthusiasm among people towards Futurism and modern ideologies. Futurists, and Boccioni in particular, have contributed enormously to set the fundamental structure of the modern city, and to form and spread the ideas of dynamism and speed, on which not only the 20th century cultures relied, but on which our modern culture still depends. This is the reason that The City Rises is still considered one of the most symbolic artwork of Italian Futurism, and of our modern society.

Take a moment to appreciate our collection of Futurist artworks and books on Wallector.com.