Love In Art: The 6 Most Romantic Artworks Ever Made! 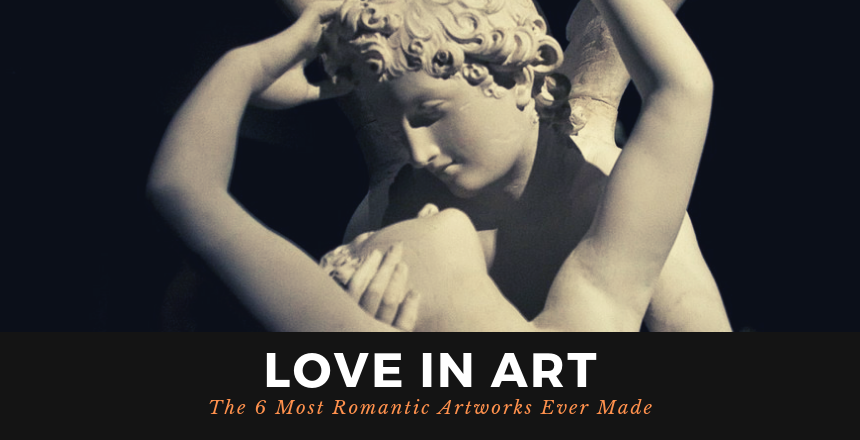 Since the beginning of time, artists have narrated the events and passions of human beings; literature and mythology are inexhaustible sources of narration. Let us begin our journey through the best love stories of all times from the latter. In 1600, the great artist Gian Lorenzo Bernini gave shape to a tormented, passionate, unrequited love: the story between Apollo and Daphne. Apollo, god of Arts and Beauty, had just killed the Python serpent that infested Delphi, when he saw Cupid, god of Love, and began mocking him for the imponent weapon the child-god was carrying. Cupid, annoyed, threw a golden arrow towards Apollo; a second arrow, this time made of lead, was thrown towards the heart of Daphne, nymph of the woods, daughter of Gea; these arrows made the nymph numb to love and Apollo doomed to an unrequited love. From that moment onwards, Apollo began chasing desperately the young girl and, when he found her, he tried to grab her. Daphne, worn-out by then, asked Gea, Mother Earth, for help. Gea transformed her in a tree to prevent her from being kidnapped by the god. Bernini represented the most intense moment of the story, the one in which Apollo grasps the nymph and her hair and body start transforming into leaves and branches of a laurel oak. The work of art, exhibited at the Galleria Borghese in Rome, was commissioned by the Cardinal Scipione Borghese to Gian Lorenzo Bernini, and was realized in 1625. The story was taken from Ovid’s Metamorphoses. We stay in the same country but with a time leap of two centuries ca.: in 1800, Italy was invaded by the Austrian troops and was still split in different territories. A great artist of the period, Francesco Hayez, realized a work of art that was destined to become the most famous of art history: Il bacio. Episodio della giovinezza. Costumi del secolo XIV, also known as The Kiss. The work, realized in three different versions in the mid-XIX century, represents a fast and stealthy kiss between two youngsters in the attire of the epoch. In the first version, the most famous of the three, preserved at the Pinacoteca di Brera in Milan, shows the kiss between the two lovers; the female figure, abandoned to the arms of her lover, says farewell to the young boy, who has already placed a foot on the staircase. The male figure, indeed, is about to flee and is holding a dagger close to his hip. The garments tell us that the episode is taking place in the Italian ‘300; a small detail, furthermore, indicates that the couple is not alone: on the left of the painting, there is a shadow, presumably of an Austrian spy that is peeping the scene. The painting epitomized the aesthetic ideal of Romanticism of mid-1800 and was destined to become an icon of true and pure love. 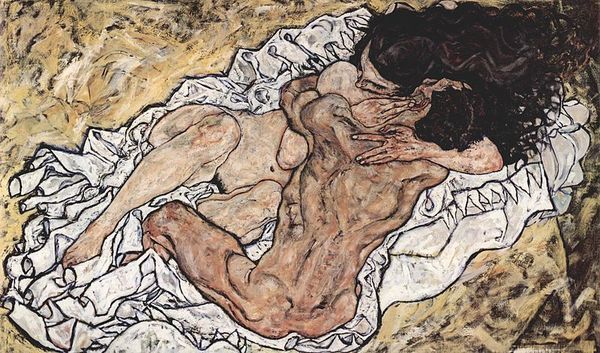 The Embrace is one of the most sensual and romantic artworks ever, realized by Egon Schiele. Among the folds of a bedsheet, two bodies cling to one another. The long hair of the woman brushes against the floor, while the man’s face can feel its smell. They are loving each other.

Schiele painted it in 1917, during WWI. The two lovers are holding each other tight to escape the horror of the world. She is clinging firmly to him, like if he was a safe port. Outside, among the streets, bombs are thundering. Inside, in the room, the noise rumbles crumpling the sheets. Their embrace turns into a grip, a desperate attachment to life. The tender and hopeless pose of the woman seems to comfort the man, overcoming his human weaknesses. Nervous and viscous brush strokes describe the two figures, whose skin appears livid like that of corpses. The last desperate love act was consumed. The two lovers seem destined to an unavoidable detachment, but their souls will always stay bound in that desperate and heart-wrenching embrace. The sculptural group, currently preserved at the Louvre, belongs to the mythological allegories of the Canovian production. It represents Cupid and Psyche about to kiss. In white marble, the sculpture has a smooth surface. The composition was built extraordinarily: Psyche is half-leaning, turning her face and arms upwards in a twisted pose; Cupid is on one knee whilst the other leg pushes forward to get closer to the lips of the woman. The subject is drawn from the legend of Apuleio, which described Psyche as being so beautiful that she raised the envy of Venus. The goddess sent Cupid to make her fall in love with an old gruesome man. Yet, Cupid, after seeing her, was the one who fell in love with her. After a series of vicissitudes, he made her enter the Olympus to stay together forever. The subject is an allegory of the power of love, seen as the intense desire that it is capable of releasing. This justifies the decision of the artist to halt the representation on the instant right before the beginning of the kiss and the satisfaction of the desire. Canova aims at a Neoclassical tension to reach a kind of timeless perfection. To do so, he petrifies life, proving matter with a definitive and eternal form. 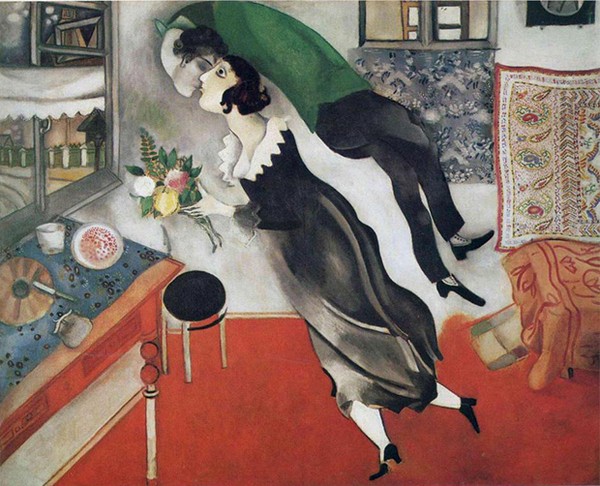 The Birthday or Anniversary, as it is also known, is a 1915 Marc Chagall’s artwork. This lovely painting represents a loving scene between the artist and her first wife Bella Rosenfeld, whom he met in St. Petersburg in 1908. The scene occurs on the occasion of her birthday, in a moment of great emotion and happiness. Her husband, the artist himself, bought her flowers and, unsatisfied, literally ‘leaps’ over her to kiss her, carrying her away. Chagall is floating lovingly above her, kissing her with his head bent and twisted.

The scene takes place in a simple interior, typical of Russian provincial style of the 20th century. The two figures, a man and a woman, seem to be free of having to conform to the common laws of physics. They simply float, unburdened by gravity. Bella, wearing a black dress, appears bent forward towards the window as if holding a festive bouquet of flowers. This is an intimate scene, and for this reason the viewer gets a feeling of being in the same room as the couple yet almost intruding upon an intimate moment. This painting is filled with sweetness, caring affection, love, and warmth.

In his autobiography My Life, Chagall described his first encounter with Bella: “Her silence is mine, her eyes mine. It is as if she knows everything about my childhood, my present, my future, as if she can see right through me.” We conclude this short list with an artist’s film: we are in the United States, in the 60s, Andy Warhol and a group of artists, film directors, and scholars subverted American art and not only. Warhol was a polyhedral and eclectic artist, who emphasized some moments of the everyday life in his art by making them “artistic”, in full Pop style. The film, in black and white and silent, is an experimental documentary directed by Warhol in the 60s, portraying long and passionate kisses among diverse couples, both heterosexual and homosexual. Couples kiss for longer than 3 minutes each, for a total duration of 50 endless minutes of heartfelt kisses. The film is one of the products made in the Factory, and was broadcasted for the first time on television in 1970, in Western Germany.

Explore Wallector’s romantic works of art here! Our online gallery offers a wide selection of original prints, sculptures, and drawings for all budgets and tastes!